What is Zen Humanism?

Zen, according to The Princeton Dictionary of Buddhism, is in Japanese, "Meditation.” It is translation of the Chinese word Chan, which is a translation of the Sanskrit word dhyana. Since the basic meaning in all three languages is “meditation,” a Zen Humanist is a Humanist who meditates.

There have been other names for Humanists who meditate. Some call themselves secular Buddhists. But this puts the Humanist in the Buddhist box. I prefer to think outside of the box and follow the truth wherever it leads.

Personally, I self-identify as a Zen Humanist teacher. I am both an ordained Humanist minister and a certified meditation teacher, being trained in both zazen and vipassana meditation.

A Definition of Zen Humanism

Zen Humanism is Humanism plus meditation. Any further definition will open up personal interpretations of both Zen and Humanism. So the following is a definition is based on my own understanding, limited and flawed as it might be.

Zen Humanism is a philosophy of life that rejects supernaturalism and affirms an individual's dignity and responsibility to seek the greater good of humanity and live in harmony with nature, with particular emphasis on each person's ability to achieve tranquility through mindfulness, acceptance, and selflessness.

A Philosophy of Life

Zen Humanism is a philosophy of life, which is also called a worldview. The American Heritage Dictionary defines a worldview as “the overall perspective from which one sees and interprets the world.”

So what is Humanism? The American Humanist Association's Humanist Manifesto III, explains, “Humanism is a progressive philosophy of life that, without supernaturalism, affirms our ability and responsibility to lead ethical lives of personal fulfillment that aspire to the greater good of humanity. The lifestance of Humanism - guided by reason, inspired by compassion, and informed by experience - encourages us to live life well and fully.”

The International Humanist and Ethical Union's Minimum Statement on Humanism, explains, “Humanism is a democratic and ethical life stance that affirms that human beings have the right and responsibility to give meaning and shape to their own lives. Humanism stands for the building of a more humane society through an ethics based on human and other natural values in a spirit of reason and free inquiry through human capabilities. Humanism is not theistic, and it does not accept supernatural views of reality.”

“First,” explains Corliss Lamont, “Humanism believes in a naturalistic metaphysics or attitude towards the universe that considers all forms of the supernatural as myths; and that regards Nature as the totality of being and as a constantly changing system of matter and energy which exists independently of any mind or consciousness” (13).

Clearly, as Paul Kurtz explains, “The modern secular Humanist outlook has been profoundly influenced by naturalism” (26). As The IHEU's Minimum Statement on Humanism states, “Humanism... does not accept supernatural views of reality.”

Since Humanism is normative for Zen Humanism, it means that we do not accept rebirth, the Six Realms, devas, or other “supernatural views of reality” that may be found in traditional Buddhism. We are not Buddhist and have no obligation to follow the Buddha's teachings any further than the evidence warrants.

In other words, Zen Humanists do not take refuge in the Buddha, the Dharma, or the Sangha. Rather, we take refuge in ourselves, and in reason, science, and the evidence.

Time Magazine reported that “scientists have been able to prove that meditation and rigorous mindfulness training can lower cortisol levels and blood pressure, increase immune response and possibly even affect gene expression. Scientific study is also showing that meditation can have an impact on the structure of the brain itself.”

Rick Hanson has documented a lot of the science behind mindfulness and meditation. According to him, “you can use your mind to change your brain for the better” (6). And as Stephen C. Hayes explains, “Recent research in Western psychology has proven that practicing mindfulness can have notable psychological benefits” (6).

Humanists follow the evidence, and the evidence is pointing to the benefits of meditation and mindfulness in living a happy and fulfilling life. Why wouldn't a Humanist embrace meditation? “A review of the psychological literature,” writes Sam Harris, “suggests that mindfulness in particular fosters many components of physical and mental health” (122).

Zen Humanism is a philosophy of life that affirms an individual's dignity and responsibility to seek the greater good of humanity and live in harmony with nature.

One of the issues that some people have with Humanism is its human centeredness. But the fact is, like it or not, we are concerned primarily with ourselves. It is our survival that takes first place.

But this self-interest needs to be tempered and brought into a larger context. The greater good of humanity means looking out for the welfare of the human race as a whole. This includes protecting the rights of each person, and thinking about the future of the race as a whole.

But the greater good of humanity includes the health and welfare of the planet. We have to learn to live in harmony with nature. We are a part of nature. If nature dies, we die.

We can also see this emphasis from a Zen perspective. All things are interdependent. We can observe this in meditation, where mind states are interconnected. Science also tells us that everything is interconnected. Ecology deals with the relationship of organisms to one another and to their physical surroundings.

The goal of Buddhism is Nirvana. There seem to be two aspects to this goal, a this-worldly one of freedom from suffering, and a metaphysical one of otherworldly bliss. As Humanists, we reject the metaphysical assertion.

Since the claim of a metaphysical and otherworldly Nirvana is beyond the available evidence, we take a more realistic goal. Since we are not Buddhists, we see no need to use Buddhist language, or be restricted to Buddhist goals.

Zen Humanism says we can achieve tranquility through mindfulness, acceptance, and selflessness. Let's begin with mindfulness.

Jon Kabat-Zinn’s definition of mindfulness is, “Mindfulness is awareness, cultivated by paying attention in a sustained and particular way; on purpose, in the present moment, and non-judgmentally” (1).

Mindfulness is about being present with what you are experiencing. It is about showing up, being aware, and noticing what is going on moment by moment. It is about being here now. You are not going to get any more moments in your life, but you can get more life in your moments.

Zen Humanism says we can achieve tranquility through acceptance. Again, the Stoics teach us to accept the things we cannot change. Reality is as it is, desiring it to be other than it is causes us undue suffering.

The Buddha explained that there are two ways we refuse to accept reality. The first is attachment, where we grab onto things and want them to stay the same. But all things come to an end. Therefore, attachment will always lead to suffering.

The second is aversion, it is when we don't want reality to be the way it is, so we try to push it away. Again, just because we don't like something is not going to change it. A wise course is simply to accept the way things are. Change what you can, accept what you can't.

As Zen Humanist, we believe that some level of suffering is probably inevitable, but that we can and should elevate as much unnecessary suffering as possible. Therefore, we should keep our attachments few and wholesome.

Zen Humanism says we can achieve tranquility through selflessness. The greatest problem with humanity is that we are selfish. We put our interests above others and disregard the rights and happiness of those who we have no interest in.

Whether you call it compassion, altruism, or lovingkindness, we need more of it. This almost all religions and philosophies of life agree on. The Golden Rule can be found throughout human history.

The strange thing about happiness is that you will never find it by seeking it. The way to find happiness is to make others happy. We truly find our happiness in the happiness of others.

Selflessness also hints at the fact that the self is an illusion. Both Buddhism and psychology are coming to similar conclusions. But to “experience the intrinsic selflessness of consciousness,” explains Sam Harris, “requires considerable training” (104). It is probably beyond the reach of many meditators.

At the most basic level, a Zen Humanist is simply a Humanist who meditates. Zen Humanism is Humanism plus mindfulness meditation.

But at a more detailed level, I see Zen Humanism as a philosophy of life. I see it rejecting supernaturalism and accepting scientific naturalism. Furthermore, I see it affirming an individual's dignity and responsibility to seek the greater good of humanity. Since all things are interdependent, I see Zen Buddhists as striving to live in harmony with Nature.

But the particular emphasis of Zen Humanism, as opposed to plain old Humanism, is on each person's ability to achieve tranquility through mindfulness, acceptance, and selflessness.

Historically Humanism has been a strong supporter of critical inquiry and social concern, but it has tended to be weak in personal fulfillment. Zen Humanism is different, it combines all the good things of Humanism with all the personal fulfillment of traditional religions, but from a skeptical and scientific viewpoint. 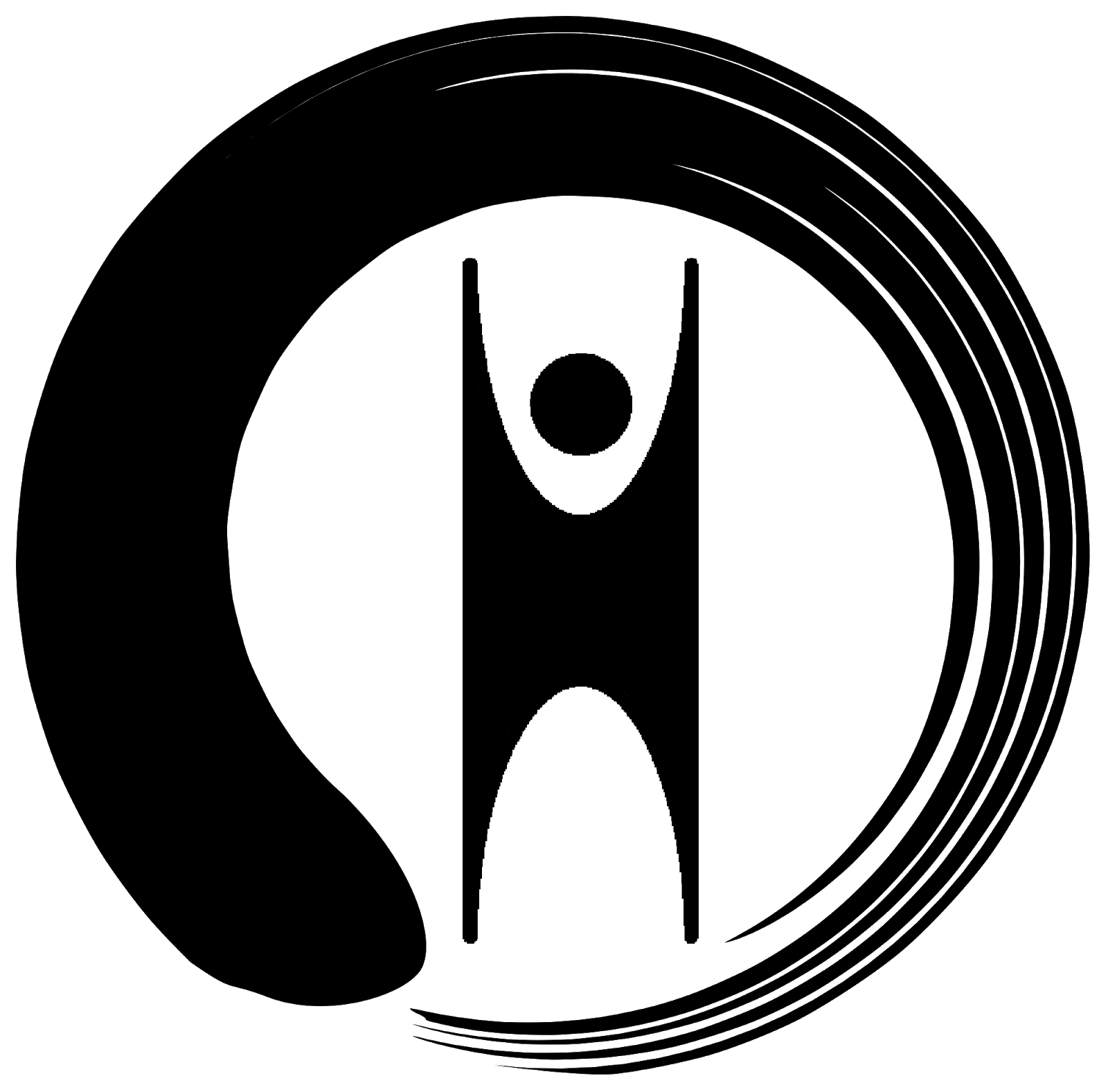 A symbol for Humanists who meditate